It just looked weird. A musical about the backstory about Glenda and Elphaba? In opinion (and aren’t we glad I was wrong) there wasn’t much way this musical would be popular and stick around for a long time.

1.Costumes--First, the show won a Tony award for Best Costume Design and it is easy to see why. Here’s a quote from the designer, Susan Hilferty concerning her concept: “The whole idea of the clothes of the citizens of Oz—I imagined that in 1911, basically when the book was written, as if a chunk of earth had been lifted off and sent out into the universe.The whole idea of the clothes of the citizens of Oz are their own distortion and changing of the Edwardian Era. When I was looking at all the clothes, I was looking at various clothes from the Edwardian time, and then twisting them on  their center. The twist actually has nothing to do with the tornado.” Check out this video about HIlferty’s costumes:  Threadbanger:  Interiew with Susan Hilferty, Costume Designer and/or pick up my new Costume Design with Wicked Characters Lesson 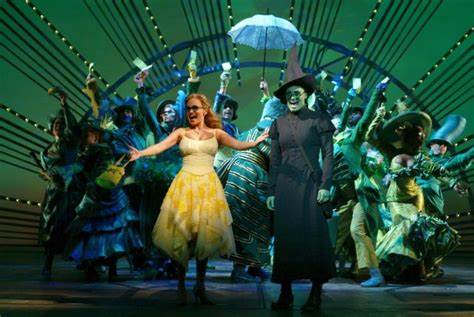 Wicked won several awards from Drama Desk as well.  Maybe that’s why Wicked could take over the world. They include:  Outstanding Musical, Lyrics, Book of a Musical, Director, Orchestration, Set Design and Costume Design.  Drama Desks are the only awards that consider Broadway, off-Broadway, and off-off-Broadway shows in the same competitive categories.