This is a subject near and dear to my heart.

I became a youth theater director by accident.  My college friends would say they thought that’s what I would end up doing with my theater degree.

I had no idea, really. But it stuck with me.  I really did enjoy it!

In thirty-eight years of teaching and directing, I directed over 250 plays and musicals with adults and children alike.

During that time, I started the careers of several child actors who have gone on to be Broadway performers or work in the industry.  That’s a really cool thing.

In addition, there are probably several hundred who are still involved in theater in their communities.  I love that even more!

If you think of all the people which I’ve auditioned– just crazy!

As a result of these experiences I’ve learned a thing or two about auditioning and directing children.

Of course, It depends upon the age of the child and the production, but here are some questions to ask yourself prior to auditions if you plan to direct them.

Here are some questions to ask yourself:

(I’m assuming you are working in a community theater or semi-professional.)

How many child actors go on to make a career of it?  When I was researching this topic, I found several biographies on Wikipedia.com.  I remember seeing these four perform.

They were absolutely stellar.

Daisy Eagan started her early theatre training at the Neighborhood Playhouse School of the Theatre’s Junior School where she had classes in acting, singing, and dancing in the early 1990s. She then went on to star on Broadway in “The Secret Garden” with Mandy Patinkin and Rebecca Luker. She became the youngest recipient to receive the TONY award for featured actress in a musical.

David Alvarez is one of the three boys originally cast to play Billy in the Broadway production of Billy Elliot the Musical, along with Trent Kowalik and Kiril Kulish. He needed to study tap, acrobatics, voice and acting for the role and spent July 2007 through March 2008 preparing. Billy Elliot the Musical began previews in New York on October 1 and officially opened on November 13, 2008. His first preview performance was on October 2, 2008. He played his final performance on January 3, 2010. Alvarez’s portrayal of Billy Elliot was highly praised by the critics. 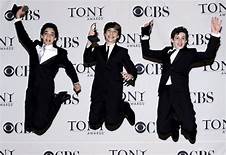 Kiril Kulish was born in San Diego, California on February 16, 1994. His parents, Raisa Kulish and Phil Axelrod, are Jewish immigrants from Ukraine. His older brother, Victor, is a singer/songwriter and recording engineer, and his older sister Beata is a TV/film producer. He grew up speaking Russian, Ukrainian, and English. He started studying ballet at age five and ballroom dancing at age 8. He studied at the San Diego Academy of Ballet and was the youngest male to be admitted to their junior company.

Kiril was the winner of the Junior division Grand Prix at the Youth America Grand Prix in 2006, 2007, and 2008  and won the Hope Award in the Pre-Competitive division in 2006. Kiril Kulish won first place in Latin Ballroom at the USA National Dance Championships in 2006 and 2007. In 2012 and 2013 Kiril Kulish became the Youth USA Champion in Latin DanceSport and will represent the USA in Beijing and Paris.

Trent Kowalik was born in Wantagh, New York, the son of Lauretta (née Splescia), an organist and pianist at St. Raphael’s Roman Catholic Church in East Meadow, New York, and Michael Kowalik, a surveyor. He has three older sisters. He started dance lessons at the age of three at Dorothy’s School of Dance in Bellmore, New York. At age four, he began instruction in Irish dancing. At age six, he was competing at the highest level, Open Championship. He danced with the Inish free School of Irish Dance.

In April 2006, at age 11, Kowalik won the youngest male age group of the World Irish Dancing Championship (Irish: Oireachtas Rince na Cruinne) in Belfast. He is a five-time undefeated North American Champion and a World Champion. He holds multiple national titles in Scotland, England, and Ireland, and continues to study ballet, tap, jazz, and lyrical dance.  He graduated from The Jacqueline Kennedy Onassis School–Pre-Professional Division American Ballet Theatre in 2013. He graduated from Princeton University in June 2018. He was a member of student dance groups Princeton University Ballet and BodyHype Dance Company.

Note:  Most child actors grow up to lead lives away from the stage.

However, if you have the chance to get them started take heed of my questions.  They will help you immensely.

For more information about working with children, check out these posts:

How to Make Your Drama Class More Successful&#8211;Lessons Learned from 38 Years of Teaching Drama-Elementary

How to Make Your Drama Class More Successful &#8211;Lessons Learned from 38 Years of Teaching-Middle School

What child actors have you started?  I’d love to hear about them.  Contact me at dhcbaldwin@gmail.com or DeborahBaldwin.net