“What is Shakespeare in the Park and why should you like it?” students ask me.

I dodge the question, because….

I have never seen a Shakespeare in the Park production. (Ok, don’t judge me.)

I bet it is super cool, though. I’ve heard the Shakespeare in the Park Buffalo is awesome!  Okay, let’s go next summer.

I’ve often wondered who created it. Here is what I found out.

“Shakespeare in the Park is a term for outdoor festivals featuring productions of William Shakespeare‘s plays. The term originated with the New York Shakespeare Festival in New York City‘s Central Park, originally created by Joseph Papp. This concept has been adapted by many theater companies, and over time, this name has expanded to encompass outdoor theater productions of the playwright’s works performed all over the world.

Shakespeare in the Park started as an idea to make theater available to people of all walks of life, so that it would be as readily available as library books.[1] The performances are more often than not free admission to the general public, usually presented outdoors as a summer event. These types of performances can be seen by audiences around the world, with most festivals adapting the name for their productions, such as Vancouver‘s Bard on the Beach. Many festivals incorporate workshops, food, and other additions to the performances making this type of theatre experience an interactive community event.”

So FREE  admission to a play by the Bard.  That’s great! Anyone can attend from any walk of life.  That’s the way theatre should always be presented.

Here are cities in the U.S. who have Shakespeare in the Park:

The Montford Park Players, a community theater company, has been staging free Shakespeare productions in Asheville, North Carolina since 1973. The productions were first staged at a municipal park on Montford Avenue and, in 1993, moved to its current location, the Hazel Robinson Amphitheatre.[2]

The Baltimore Shakespeare Festival present productions outdoors each summer in the Meadow at the Evergreen Museum & Library.[3]

Commonwealth Shakespeare Company presents professional productions of Shakespeare in Boston Common. The first production was in 1996 at Copley Square; a year later the program was moved to the Commons, first at the Parkman Bandstand and more recently at the Parade Ground.[4]

Buffalo’s production of Hamlet, the witches.

The Hudson Shakespeare Company, founded by L. Robert Johnson in 1992, features a summer season where the company stages productions for each month of the summer. Besides Shakespeare standards such as Hamlet and A Midsummer Night’s Dream, they often produce one to two lesser done productions a season such as The Two Noble Kinsmen, Cardenio and Henry VIII. Based in Jersey City, NJ, they also tour as part of their summer season to other New Jersey locations such as Fort Lee, Hackensack, Kenilworth, Hoboken, West Milford and also to Stratford, CT. [7]

The Heart of America Shakespeare Festival was founded by Tony winning Broadway producer Marilyn Strauss in 1993 at the urging of Joe Papp[8] with a production of The Tempestin Southmoreland Park. In 1998, they began to produce two productions per year, with a total of 23 production at the start of the 2011 season.[9]

Kentucky Shakespeare Festival is a non-profit, professional theatre company in Louisville, Kentucky that produces and performs the works of William Shakespeare. The main productions offered are the annual summer series of plays presented free to the public at Central Park. This series, commonly called “Shakespeare in Central Park”, sprung from an initial production in the park by The Carriage House Players in the summer of 1960. They also perform shows in other venues, as well as conduct educational programs related to acting and other theater-related skills.

The original Shakespeare in the Park was founded in 1954 by Joseph Papp as the New York Shakespeare Festival, which eventually led to free public performances in Central Park.[3] Since 1961 an outdoor amphitheatre, the Delacorte Theatre, has accommodated these productions. Many celebrity actors have worked the Delacorte.[10] People often line up in the morning to assure tickets for the evening performance.[11] Many seasons have featured works by other playwrights, including Bertolt Brecht and Samuel Beckett.[12]

This Philadelphia theater company offers the largest, free outdoor production of Shakespeare’s plays in the greater Philadelphia area. Shakespeare in Clark Park was formed in the fall of 2005 by Marla Burkholder, Maria Möller, Tom Reing and Whitney Estrin. In their inaugural season, Shakespeare in Clark Park presented four performances of Twelfth Night, drawing an audience of over 2,000 people. Those audiences have grown to over 5,000 and the annual show has become a staple of summer in Philly.[15]

Jennifer Tober founded Pittsburgh Shakespeare in the Parks in 2005. Their performances are free and utilize various public parks in the Pittsburgh area.[16][17]

The Rochester Community Players have staged free Shakespeare productions at the Highland Bowl in Highland Park each July since 1997.

Free Shakespeare in the Park began in San Francisco in 1983, with its debut production of The Tempest in Golden Gate Park. Produced every year in San Francisco, Pleasanton, Cupertino, and Redwood City from July through September, this program stages professional theater free of charge throughout the San Francisco Bay Area.[18]

Shakespeare by the Sea was launched in 1998 by Producing Artistic Director Lisa Coffi. It presents free Shakespeare productions in San Pedro, Los Angeles and throughout Los Angeles, Orange and Ventura Counties.[19]

Since 1989, GreenStage has been producing free Shakespeare in major parks in and around Seattle. In 2014, they completed the entire Shakespeare canon.[20]

In 1994, a theater company called the Wooden O started annual summer Shakespeare performances at the Luther Burbank Amphitheater on Mercer Island, Washington. In later years park venues including Lynnwood, Washington and Auburn, Washington were added. In the spring of 2008 the Seattle Shakespeare Company merged with Wooden O and continues to present free Shakespeare productions throughout the Puget Sound region.[21] 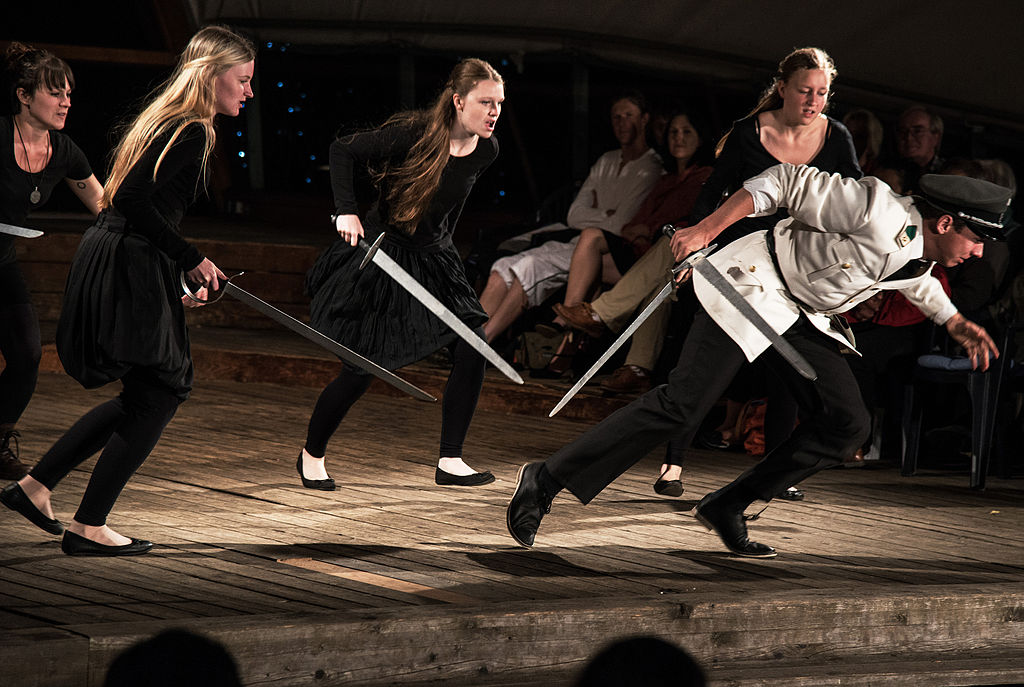 The South Dakota Shakespeare Festival (SDSF) was formed in 2011 and launched its inaugural season in Vermillion, South Dakota, in June 2012. Since the summer of 2012 the SDSF has been offering fully produced professional Shakespeare performances in Vermillion’s Prentis Park and daytime arts educational offerings for youth and adults. |

Michael J. Trout and Richard G. Fallon Founded the Southern Shakespeare Festival and Renaissance Fair in 1996. It is held in Tallahassee, Florida‘s Kleman Plaza Tallahassee before it became the location of a parking garage. Currently, being organized for re-launch.

Canada, our dear neighbor to the north, has quite a few SITP productions.   (Love those Canadians…)

Australia and New Zealand, too!

I had no idea there was so much Shakespeare being produced, but I guess it’s stands to reason considering how much we all love Shakespeare.

If you are looking for an unusual lesson to teach Shakespeare AND integrate it with drama, here is one—Costume Design for Romeo and Juliet set in the 1940s.

Or my Shakespeare Card Games and Boom Cards

Have you attended a Shakespeare in the Park performance? I bet you liked it.  I’d love to hear about it.