I have been involved in theatre for nearly forty years. I have twelve important questions to ask about your city’s community theatre.

I’ve seen fabulous theatre and some really stinky stuff, too.  Even on Broadway!

I’ve melted enduring out door theatre in the dead of summer until intermission when I could get some relief in an air conditioned rest room.

I witnessed a famous, well respected professional actor break character and fall into fits of laughter and not able to compose himself right through curtain call.

Another time I caught a dancer kicking a cape off the stage that had fallen off another dancer as he exited.

You name it, I’ve seen it or experienced it myself.

Despite all of these experiences (and more), I wouldn’t trade them for anything.

Theatre is a marvelous activity in which to participate, attend or support.

But how does one know the theatre is worth supporting?

Here are the twelve questions to ask of your community theatre:

1. Does the theatre company have a season?

Is the season varied, sprinkled with a comedy, drama and musical? Or do they merely produce the same sort of shows every year?  (You know, a Disney musical for the kids, a classic comedy or frightening thriller? Does the company ever produce a brand new play?)

2. Do they sponsor a special event, such as a new play contest?

3.  Does anyone else ever rent the theatre for some other activity? Do other theater companies use the venue?

4.  Do they welcome to new directors and actually hire them?

5.  Do you ever see new performers or designers working at the theatre from time to time?

6. Do the sets and costumes look recycled?  Can you name the show a particular costume was worn in another show when you see it paraded in front of you in the present show you are seeing?

9.  Does the company ever try anything new or experimental?

10.  Does the company have a youth theatre program?

11.  How about any programs for seniors?

12.  Did you leave a performance feeling exhilarated by the show?

If the answer to any of these questions is a resounding “no!”, then I’d suggest you support some other company.

Theatre people are creative people.  If the theatre never changes, it means it’s on auto pilot and frankly, I wouldn’t support it if I were you.  When you do, you are condoning their lack of creativity, their laziness.

So, there you have it–twelve questions to ask about your city’s community theatre.

Trust me, support the new community theatre company who has just opened their doors to the public.  They have more chance of doing something new and exciting than the broken record one.  They need your support. 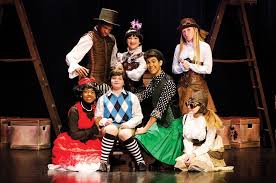 What have you seen or experienced in a performance or viewing it?  I’d love to hear from you! Contact me at dhcbaldwin@gmail.com or DeborahBaldwin.net